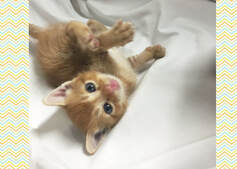 We want you to know that your donations or adoptions will help us provide care, love, and more spaces for homeless dogs and cats, all of whom you can see on the pages of this website. It's easy and safe to do, and only takes a minute of your time. Just click on our Donate button, at right. Thank you! 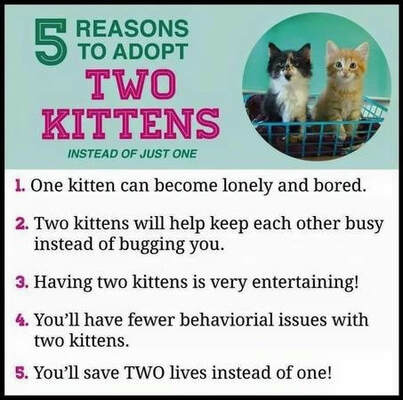 The cute tabby is Daniel (or Danny boy as his foster mom likes to call him). She says that Daniel is one of the sweetest kittens she's ever had as he likes to snuggle and be held. Devon, all fluffy gray, is not related, but they have been lovingly hand raised together like brothers, so they will be adopted together. Devon has tested early FIV+, which might change to negative later on, but it's not an issue as long as he's monitored, as you would with any cat. They'll be ready for delivery by next month, after they're vetted, vaccinated, and neutered. Submit your application now as they're sure to be in demand!
​Click any pic below to see fully, & don't miss the video! These two adorable cuties are described by their foster mom as just "the sweetest kittens!" They are playful and loving, just as kittens are supposed to be when raised with love. Thor has amazing dark stripes, and Banner has the white nose. They especially like to wrestle and chase that laser light, and Banner loves to watch the birds at the window. They are best buddies, and like to groom each other and cuddle together. Adopt these boys and put the fun back into your life!
​
​Click a pix to see fully. 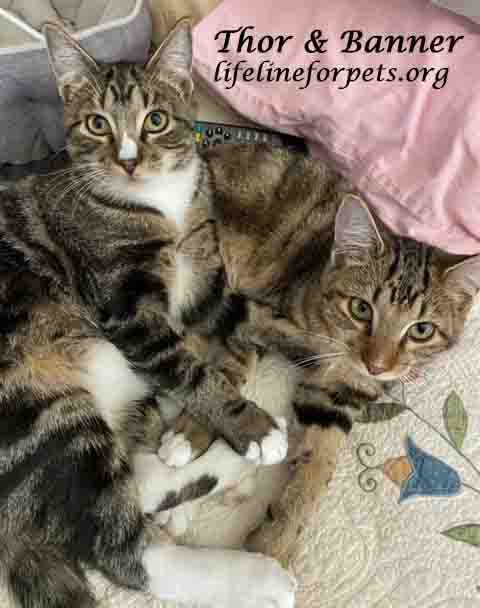 What beautiful girls! Both are very sweet and have a nice temperament. They look so much alike that their foster mom calls them twins. They are mostly tabby and white, with a little bit of Maine Coon mixed in, due to their larger size. They're very close and love to sleep and play together. Honey is the more outgoing one. She's very playful and ready to jump and have a great time, but she will come running when you call her. Holly is more shy and cautious and babylike. She loves to be near her sister and stays by her side. At Christmas they had a ball playing with all the toys that Santa brought them. We don't know how they would be with a dog, but one time the foster's friend visited with her small dog. Honey was the first to approach. She was curious and they sniffed each other, but even though Honey might have wanted to play with him, the dog didn't want to, so Honey just watched him from a little distance.

These cuties are not ready for delivery yet, but contact foster mom, Gabbi, at the 626-808-8557. They need to be spayed & neutered, and vaccinated first. In the meantime, Gabbi is taking applications for possible meet & greets. Most adults may recognize the connections with their names to very famous vintage Hollywood film stars, Marlon Brando and Marlene Dietrich. Kitten with head shot is Meowlon Brando, and the other is Meowlene Dietrich. Adopt Together.

Can't get enough? See more on the More Cats page.